Posted at 17:44h in adventure, photography by livelaugh 0 Comments
0 Likes

It’s been an adventurous summer climbing and exploring the loveliness of the West – now it’s time to venture a bit further!

I’m excited to say I’ll be heading to Australia at the end of the week for an adventure that is a lovely combination of film, design, photography, & adventure-based learning!  Sounds epic, right?

I’ll be a part of visually telling the story of 50 Sports in 50 Weeks – a unique endeavour to travel the world and experience 50 culturally significant sports alongside renown athletes in over 35 countries – all in an attempt to inspire kids (and families) to be more active (and healthy!).  From trekking in South Africa to slack-lining in Germany, I’ll be helping to capture and craft the visual story to share with the world!

I’ll be joining the crew for the first two-week-leg in Australia (including surfing, swimming, fencing, & beach volleyball!), with the possibility of extending it for a year – either way, exciting times are ahead! 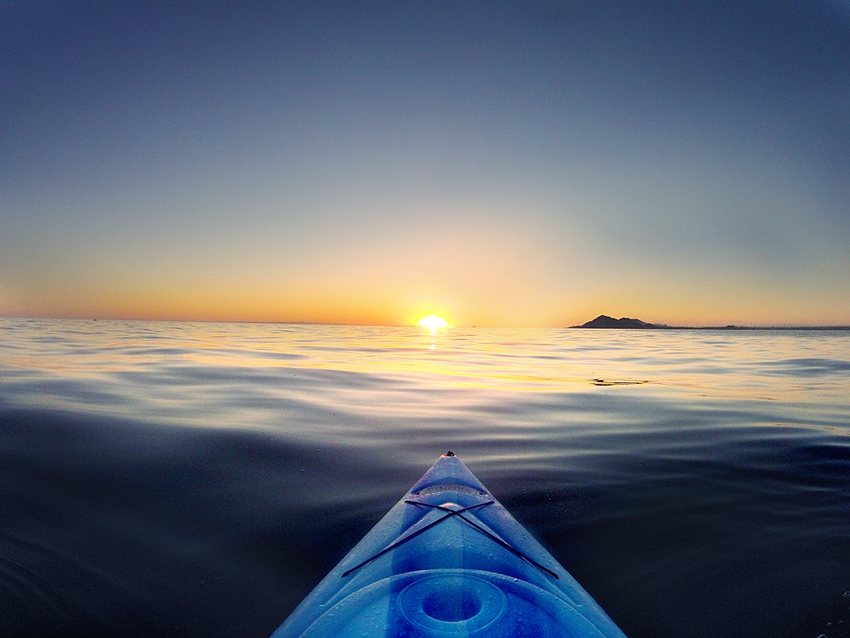 It’s been an exciting few weeks with lots of mini-adventures and new design endeavours, so I wanted to take a minute and fill you in on what this summer is shaping up to look like!

I suppose the big thing is that I’m kind of relocating to Chile on Wednesday…
Bet you didn’t see that one coming!

I’m pretty excited to say that I’ll be headed to Santiago to spend at least a few months working with the folks at Only Bloody Human. They are in the process of making some pretty rad interactive adventure films, and I’ll be jumping in and helping out with the visual side of things, which is pretty exciting! I’m sure there’s a lot more that could be said about that, but in honour of keeping things simple, I’ll just say I literally couldn’t be more excited, and look forward to exciting adventures in design! (Also, did I mention that means I’m going to Chile??)

I’ll also be working with Rustic Pathways for a few weeks later this summer, doing photography, videography, and guiding for high school students in their Spain programs (including a stint on the coast and in the Pyranees!). If you know about my interest in adventure-based learning, you’ll understand why I’m pretty excited about this opportunity as well! (Creo que necesito a practicar mi español mucho! Tal vez a hablar con fluidez al fin???)

Spain will be followed closely by a 12,500ft trek up Western Europe’s tallest Mont Blanc, with a handful of friends from Belfast! Some of which also happen to be the folks at C2SummitAdventures, whom I also happen to be partnering with and selling a couple prints in their online shop (shameless plug?)! So give them some love and pop over and check out some lovely photos in their new shop (including the one below, from Mt. Blanc, by Steven Carmichael!).

And in other news, in case you missed it, I’m honoured to have been asked to contribute an article about last year’s Yukon Quest adventure to Sidetracked Magazine – have a read here if you’re interested and/or want to see some cute dogs!

So there you have it – looking forward to a summer of challenges, opportunities, adventures, and endless creativity! 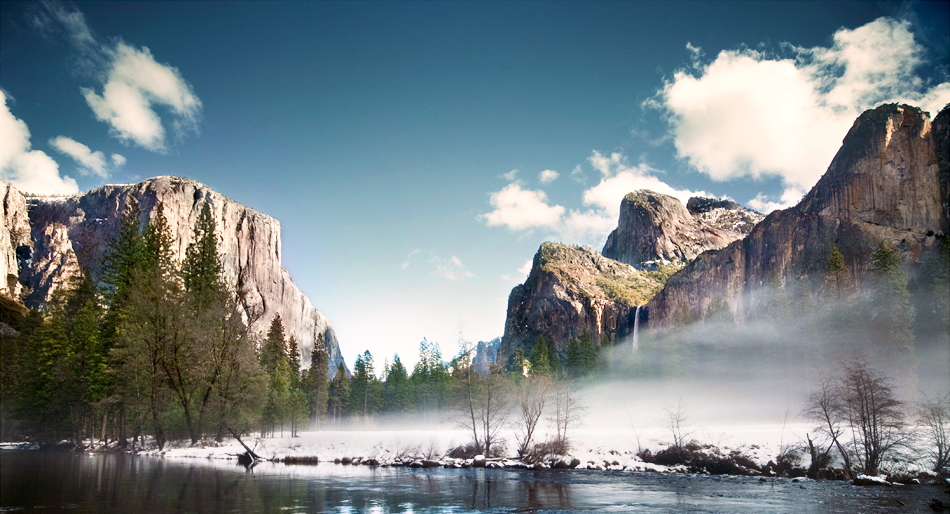 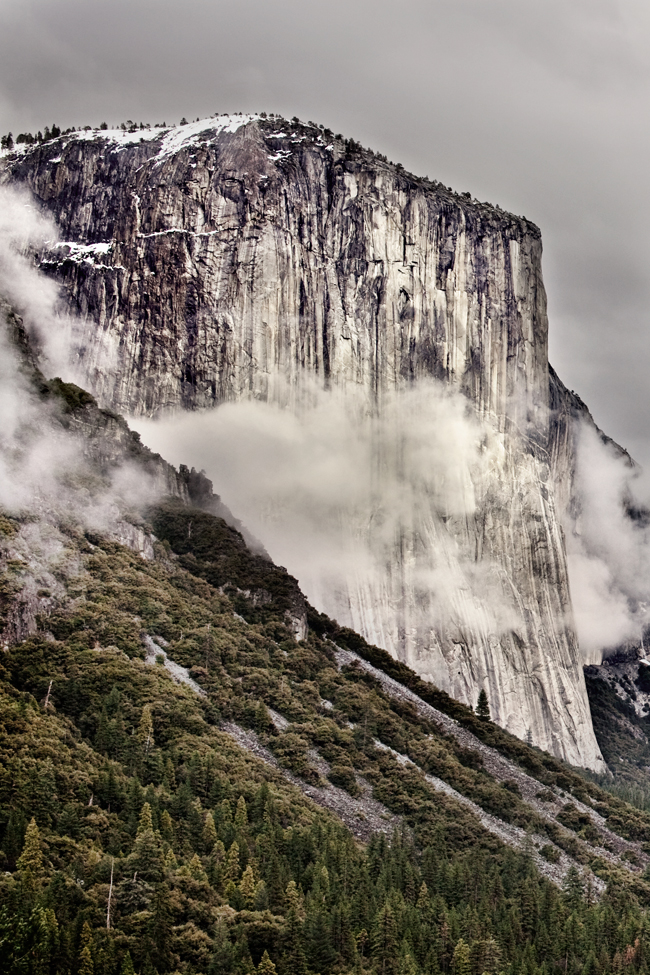 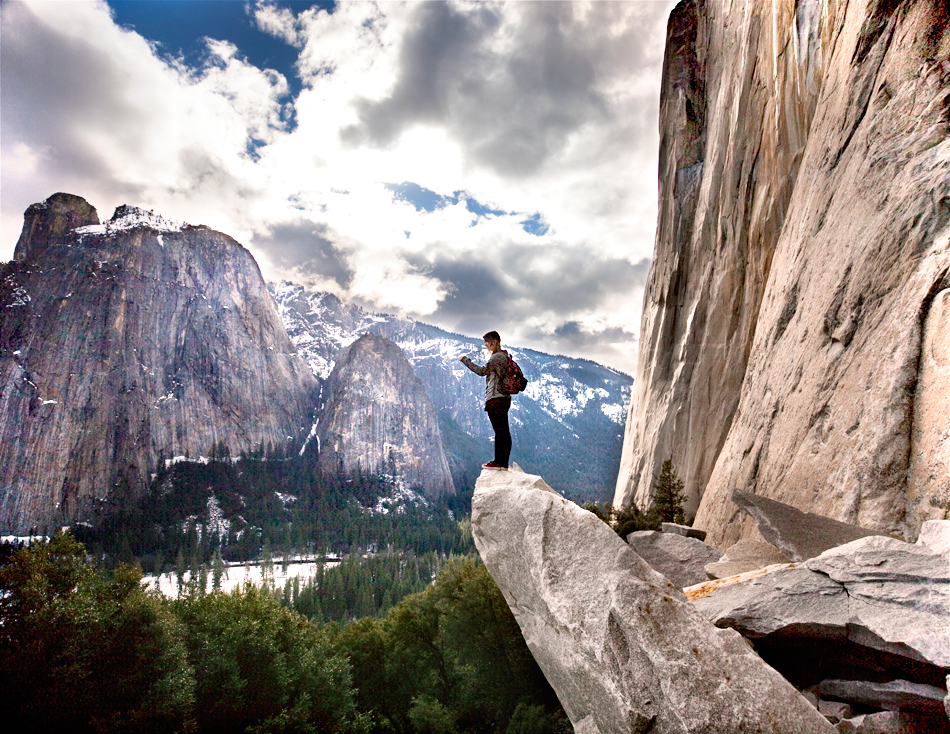 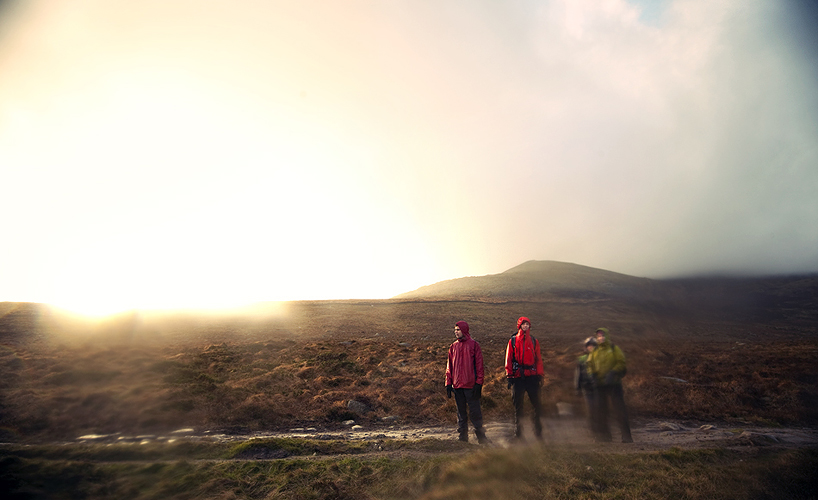 01 Feb A Tale of Some Coming Tales

Posted at 11:19h in adventure, inspiration by livelaugh 0 Comments
0 Likes

Like, last year was pretty incredible. From finishing my Master’s degree to climbing some stunning mountains to trekking across the sub-Arctic in the name of photography, it was full of incredible adventures and really great work opportunities alike.

But my favourite parts? They were the moments on the tops of mountains eating cold pasta and watching crazy clouds roll into vast valleys. The moments where we pushed ourselves, and each other, to do more than we thought we were capable of. The moments where it was pouring down rain and we found joy in climbing anyway. The moments sitting below dozens of tree-houses, swapping stories with complete strangers by the fireside. Those are my favourite kinds of stories – the ones where people embrace the diversity and beauty of adventure, even if in the tiniest of ways.

As a photographer/designer, essentially my goal with LiveLaugh is to “explore new and innovative ways of visual storytelling” – be that innovative design solutions or telling tales of adventure through photography, that vision and focus hasn’t changed.

As of right now I’m most fiery-passionate about adventure. I believe that when you are passionate about something is when you are most creative, so this year I’ve decided I want to focus this blog more personally and specifically on telling more tales of adventure and the people that make them special. 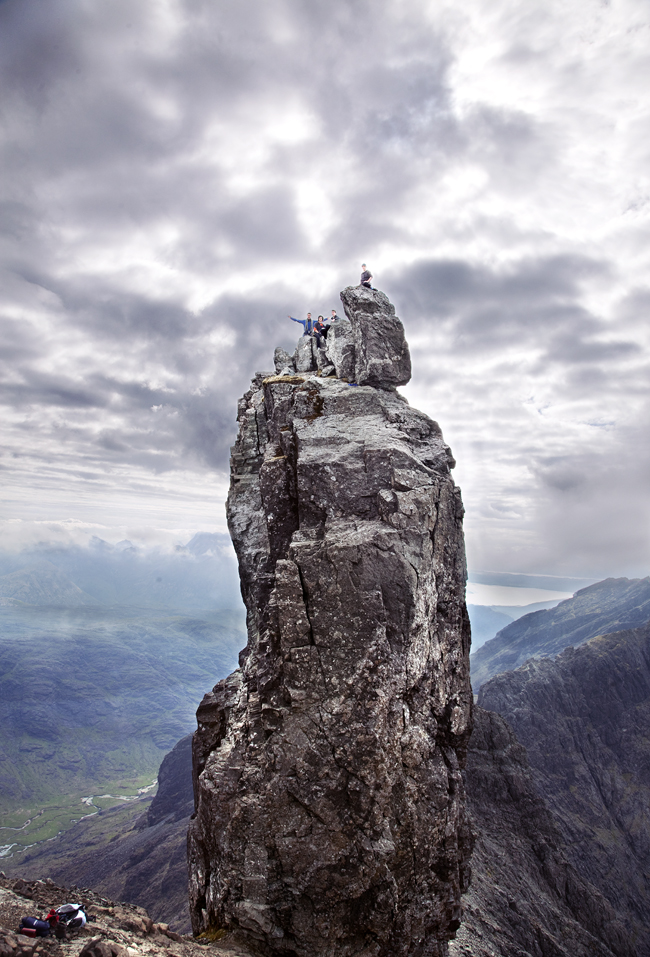 Posted at 13:14h in photography by livelaugh 0 Comments
0 Likes

I’ve always loved the Scottish highlands. The hills are an incredible shade of green and the sky usually dons an impressive display, almost as if it is in a constant battle with itself over whether to shine brightly with sun or poor with rain, resulting in continuously dramatic cloudscapes.

So I was pretty excited to head off with a group of friends and fellow adventurers to climb the Isle of Skye’s notorious ‘In Pinn’ earlier this month.

The trek to reach the pinnacle was incredible, and the view seemed to get more spectacular with every turn, almost as if we were in the deep reaches of the Peruvian mountains or some otherworldly place. When we finally reached the peak, looking over the ridge revealed an incredible mountain-scape, where we could literally see clouds rolling over the peaks and into the valley below – easily one of the most beautiful things I’ve ever seen!

And of course, the climb to the top of the pinnacle itself was pretty epic, and revealed the best view of all. Here are a few photos of some of the climbing action that went down! 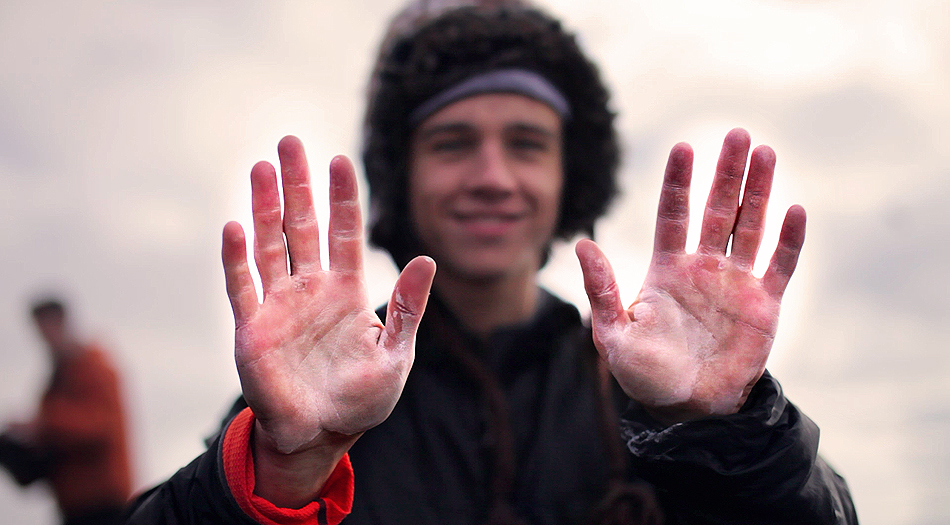 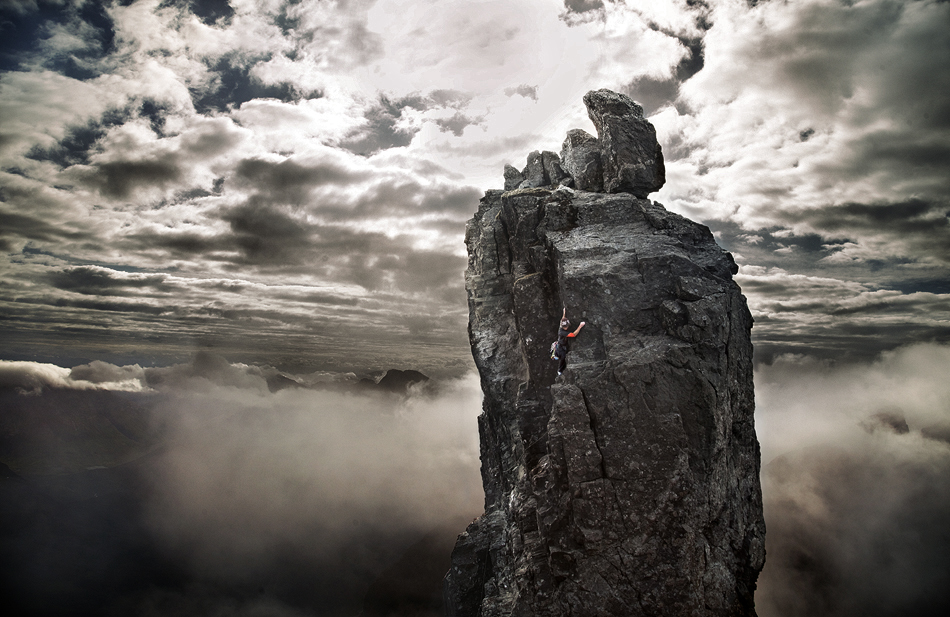 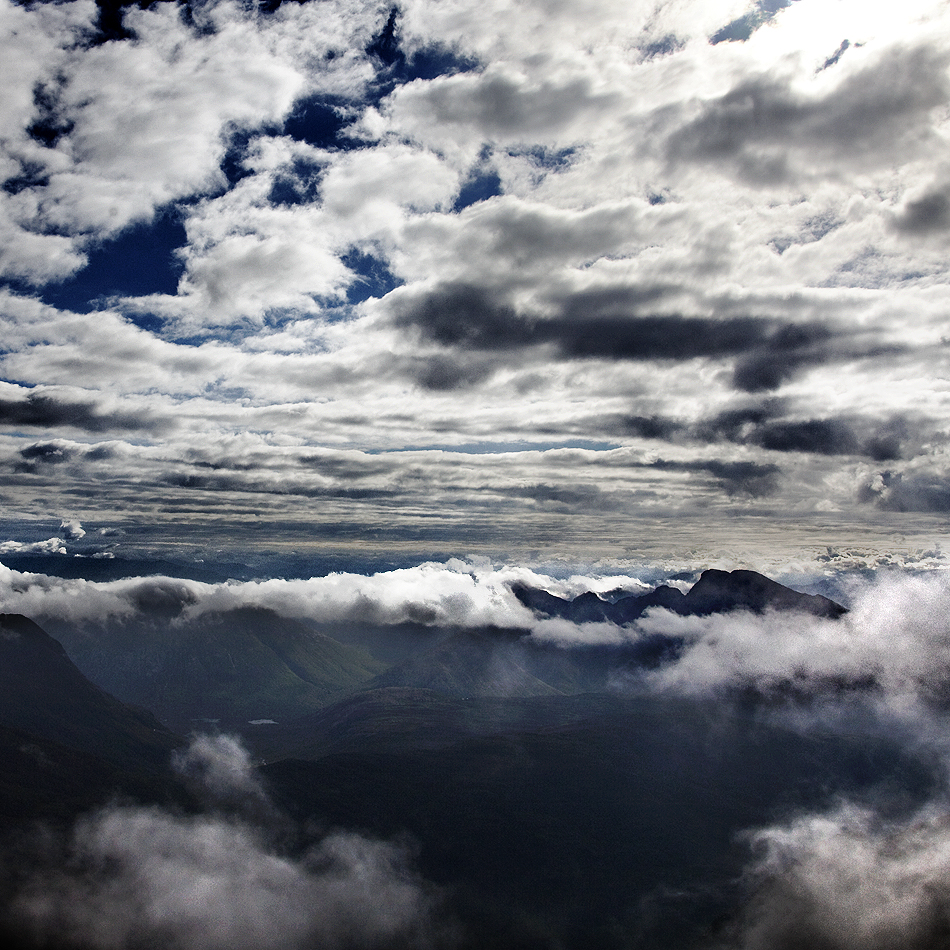